Finals week just ended for the University of Michigan. Finals is the time of year when student lives seem to pause and much of their attention focuses on exams and grades. With so much of our students’ grades hinging on the last few weeks of the term, this is a period when stress spikes.

Last fall, I learned of a new phone app becoming popular with our students. The app, called Yik Yak, allows users to post short bursts of text. What makes this app unique is that the posts are entirely anonymous. For those of you not familiar with Yik Yak, see the short overview at the very bottom of this post.

In my continuous quest to keep abreast of the lives of our students, I downloaded Yik Yak. I check the app every once in a while. Posts tend to fall into one of a handful of categories before getting buried by other posts and eventually expiring. Students post one-line jokes (often about college life), complaints about their courses or other students, pledges to reach out to their “crush,” even a few offers and requests for sex, etcetera.

Then I stumbled on this conversation — which I’ve included in its entirety at the bottom of this post. Go ahead, if you haven’t already, scroll through the conversation….

I see a variety of things here. I see a student who’s stressed and not sure how to cope. I see a conversation about suicide. I also see a community converging to support someone with whom they have just one thing in common, they’re UofM students.

Yik Yak has seen bad press since its creation. The critics claiming that it’s rife with bullying and a breeding ground for bigotry. Sure, many of the posts on Yik Yak are not contributing to a better world, but I don’t know that the space created by the app makes it a worse place. Whether we like it or not, we (higher ed professionals) have no say in how our students are using the internet. The largest role we can play is to help them make sense of what they see out there.

From what I gather, this student did not follow through with the suicide — though, of course, who knows. The group did gather on the diag.

I’m not sure how to close this post. I wanted to share the example of Yik Yak being used for good, but I don’t know that the experience has changed the way I go about my work. Yik Yak is neither inherently good nor bad, but regardless, social media apps are here to stay. Students are stressed and sometimes that leads to thoughts of suicide.  I’m glad that one person’s cry for help not only led to community support for that individual, but also raised awareness of suicide. I suppose the message is to keep on keeping on, and sometimes… often even… our students will surprise us. 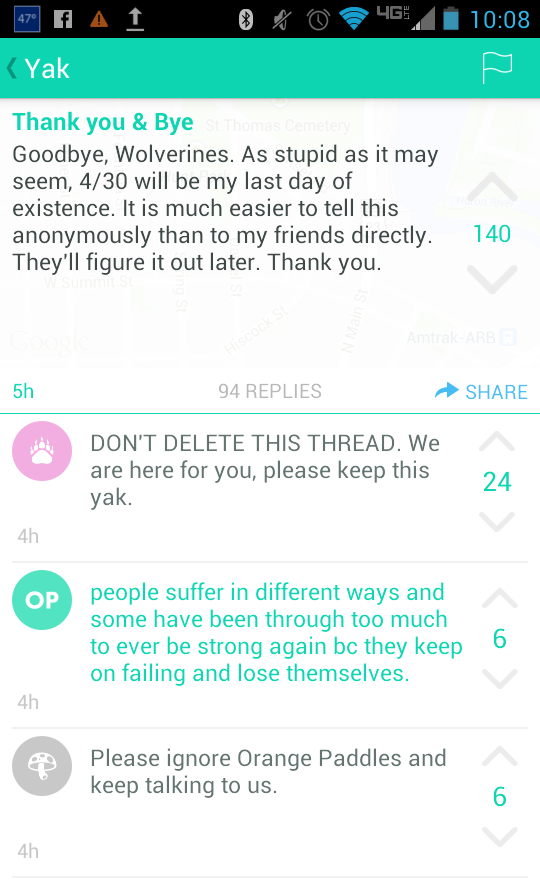 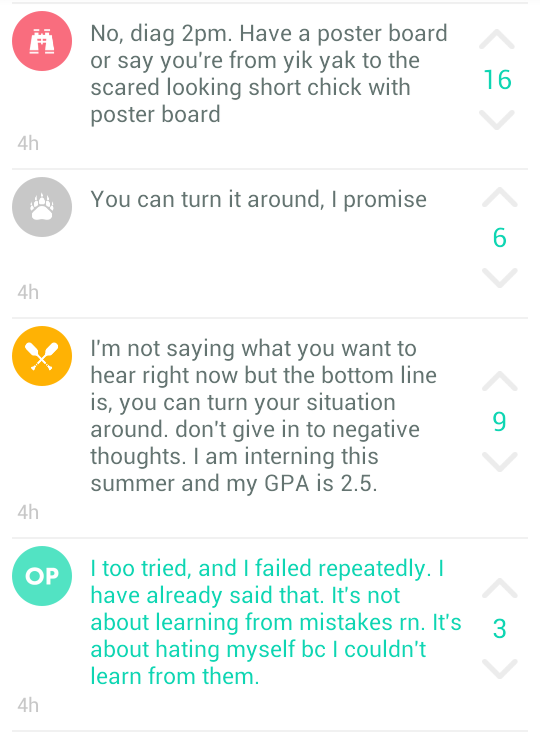 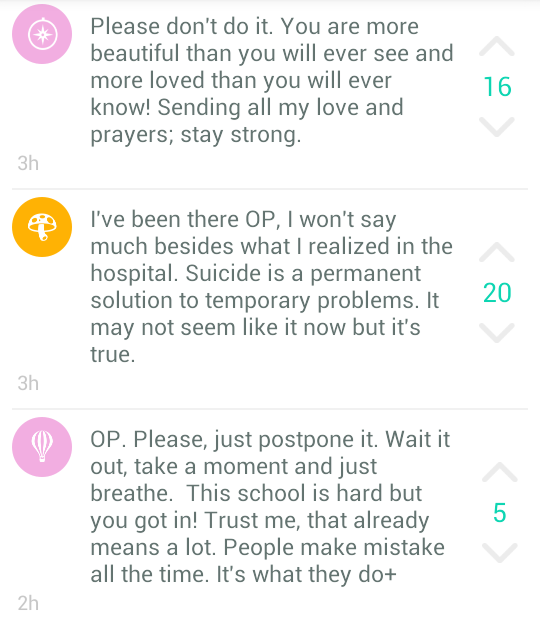 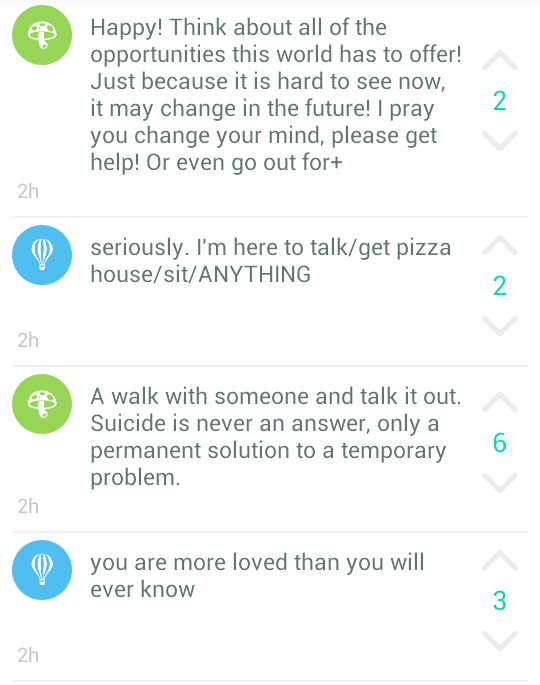 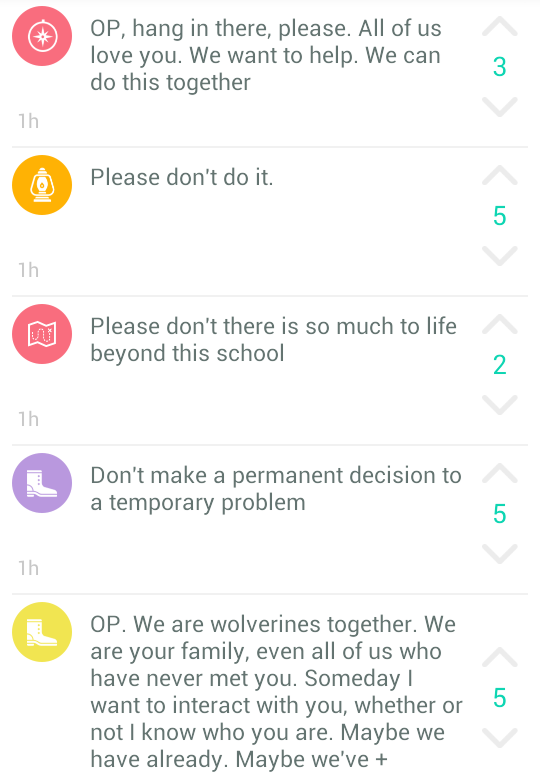 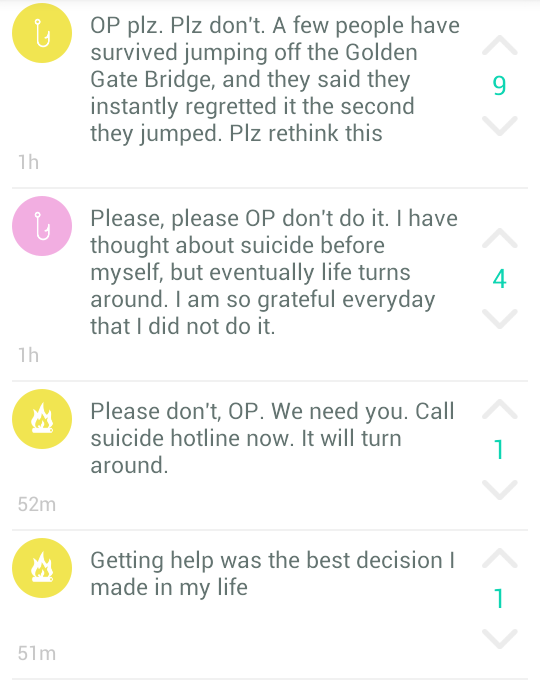 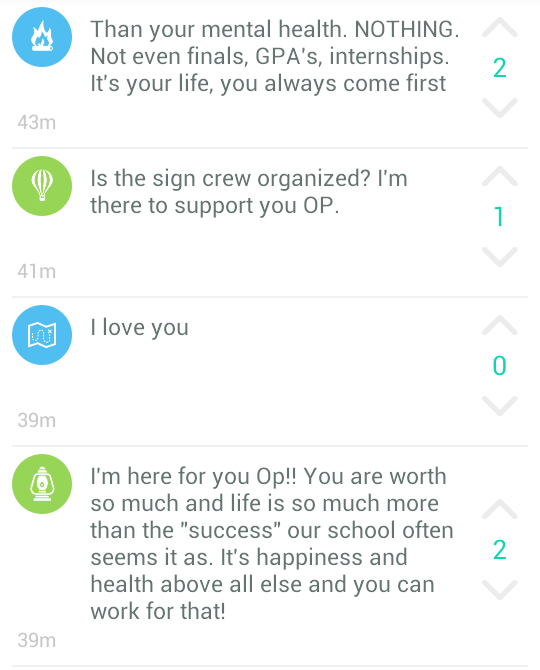 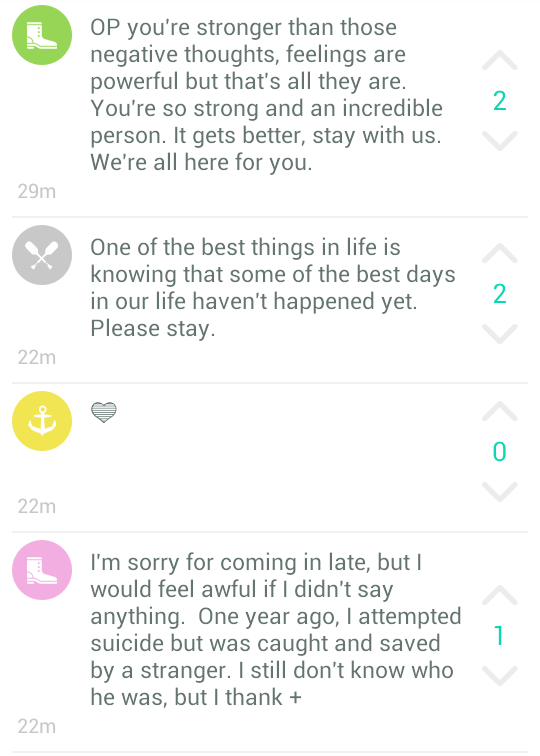 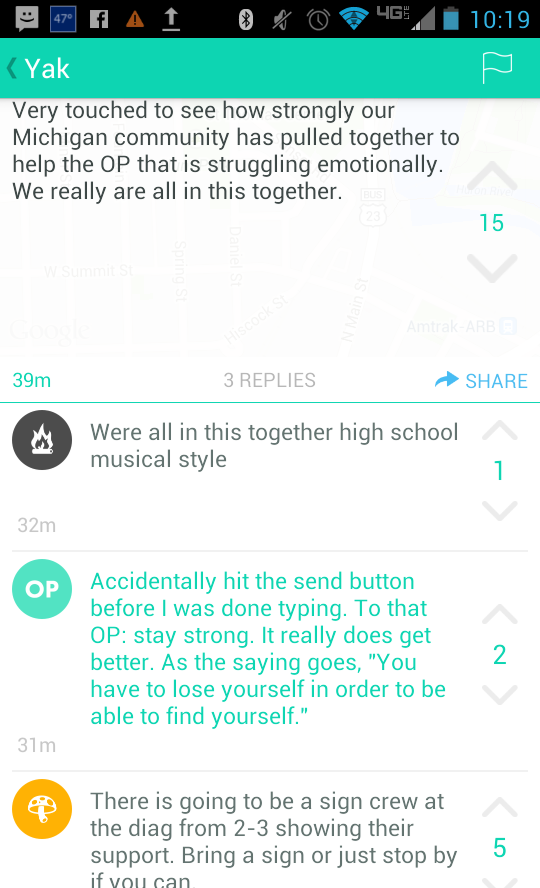 YIK YAK OVERVIEW: The app works much like twitter, where users post short bursts of text and content is viewed as a list, with the most recent posts at the top — though you are able to reply to posts, thus creating conversations (one of which I’ve shared below). The app only shows “yaks” occurring within a certain radius (a few miles) of you. As a result, communities of Yakkers have popped up around colleges and universities.

The yaks are completely anonymous, though the system randomly assigns a color and symbol to each user in a conversation, allowing you to keep track of who’s saying what within a conversation. In the conversation below, you’ll see a number at the right of the screen. For each post, users can choose to up-vote or down-vote the post. The number shows the count of up-votes (minus down-votes) a post has received. If you’re still confused about Yik Yak, google it — I’m sure many more have explained the app in a far more readable fashion than I just did.